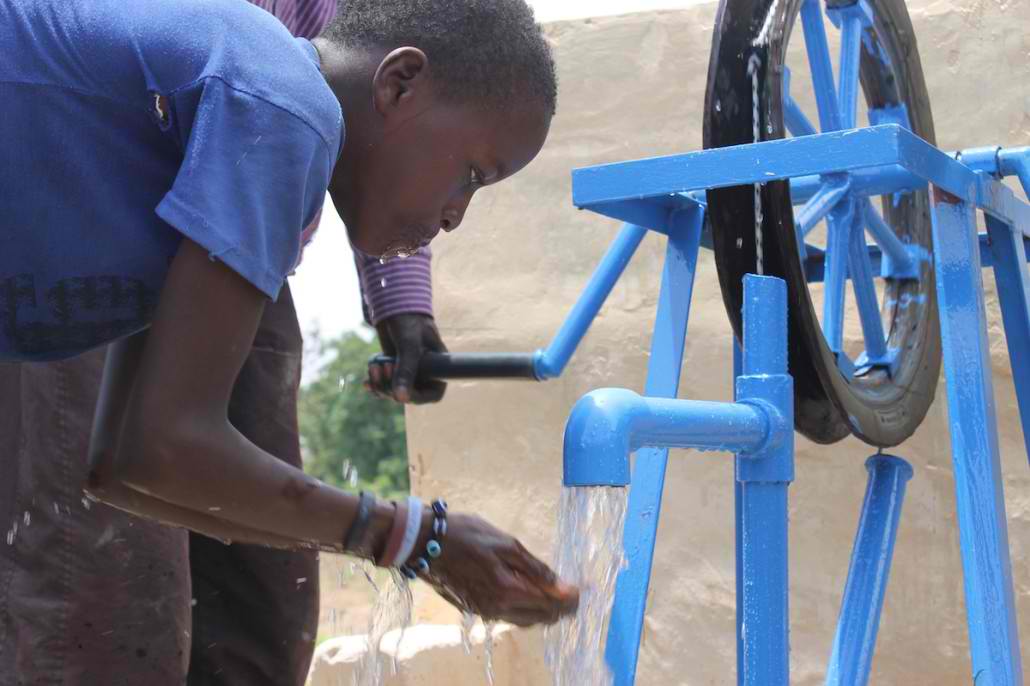 SENEGAL – A team of well drillers led by Rev. Tim Eby, the Nazarene Church’s district superintendent in Senegal, has touched the lives of thousands of people in West Africa by bringing a fresh water source and the message of Jesus Christ to thirsty villages.

The well-drilling ministry, EmmanuWell Ministries Africa, has drilled about 12 wells in Senegal over the past two years. The wells are funded by individual donors, churches from various denominations, and The Christian Broadcasting Network.

“This is a region of the world that only receives a very small percentage of rain every year. We’re lucky to get two months of rain out the year,” Rev. Eby said. “Most of the villages either have a poor source of water or no source. They’re traveling long distances just to get water to survive on.”

In 2004, only 64 percent of rural Senegalese had access to safe drinking water, according to the United Nations Development Programme. Several organizations have been working to bring that number up.

The change that fresh water brings to a community is enormous, Eby said. People contract fewer illnesses; young girls’ days are no longer consumed by hours-long treks to retrieve water; the well being of the village dramatically increases, he said.

But for Eby and his crew, the wells are about more than just physical health. The group is also concerned about the thirst in people’s souls.

“The power of the wells is that bringing fresh water brings you the chance to tell somebody about the Living Water. And ultimately their thirst, which is physical and very real, pales in comparison to their spiritual thirst,” Eby said. “They live in fear and darkness. … We offer hope and light in a place that is full of darkness and hopelessness.”

Eby told a story of when the crew was drilling in a village where witchcraft was prevalent. It was the first time they were using a large, high-tech well-drilling machine called the Hydra-Fab. Each time the crew drilled, something went wrong. Chains broke. Sand caved in and buried the drill. Time and time again, the group drilled unsuccessfully.

“It was one of the greatest spiritual battles that I had ever had,” Eby said.

A grandmother in the village asked them to stop drilling, saying every time they did, she heard screaming.

“I told the team, ‘This machine is not making any noise. It’s the fact that we’re drilling in the devil’s back yard,'” Eby said. “‘If we succeed here, then we’re going to prove that Christ is more powerful than Satan’s attacks.'”

On the seventh try, the group succeeded. The grandmother eventually came to the Christian leaders, who were also reaching out to the children in the village, and said, “I need to be delivered,” according to Eby. They prayed for her for several hours until she testified about having freedom from the voices that had haunted her.

“You look at this lady’s face, and she is totally different,” Eby said. “From her victory, we had 27 people come to Christ and were baptized, and we started a church there.”

The village of about 2,000 people gave the Nazarene Church land for a building, Eby said. He hopes that a new building will be paid for through an agricultural project that the church is launching in Senegal called the Joseph Project.

“We’re hoping that out of the agriculture project, when we sell the crops we’ll have enough money to build a church,” he said. “We can’t wait for money to come from the outside to build a local church. We have to get the resources from within.”

The work of EmmanuWell is expanding from Senegal to other parts of West Africa to improve access to water and share the gospel message.

“It’s pretty hard to preach the Gospel without meeting the need. And the physical and the spiritual need are both there, so you can’t meet one without the other,” Eby said. “Our goal is not just to put a well in an area but to help the community to be transformed physically and spiritually. And with that testimony, village after village, we hope to win them for Christ.”