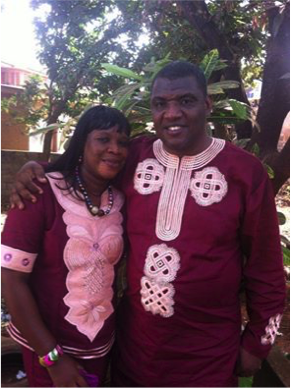 January 7, 2015. Although the country of Sierra Leone is experiencing challenging times, God’s Kingdom is still moving forward through revivals and the commitment of wonderful leaders. Rev. Vidal Cole is one of them.

Rev. Paul and Sharon Martin served as missionaries for the Church of the Nazarene in Sierra Leone, West Africa from March 2004 to March 2013. They mentored Rev. Vidal and Marie Cole and many others to build a strong holiness foundation in the country. They now serve in Accra, Ghana in the pastoral training and education for the Africa West Field.

Rev. Vidal Cole serves as senior pastor of the Overcomers Assembly Church of the Nazarene near downtown Freetown, Sierra Leone. A life-long resident of Freetown, Vidal was raised in an Anglican family; his father was a high-level manager as a career banker.

A graduate of Albert Academy Secondary School, an Evangelical United Brethren institution in Freetown, Vidal pursued accounting and worked in banking for several years. Following his conversion as a young man, he felt called to full-time ministry. In 1995 he founded the Overcomers Assembly Church.

In 2005, through the invitation of a friend, he attended pastoral training classes offered by the Church of the Nazarene. Through new awareness he pursued and experienced the grace of entire sanctification. As he continued Nazarene ministerial studies, through his careful and wise leadership, he led his independent church into official organization in the Church of the Nazarene (Centennial Sunday 5 October 2008).