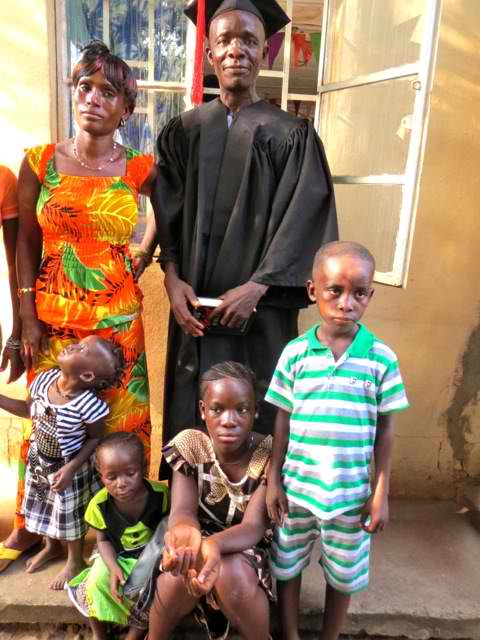 –Reverand Vidal Cole,  Freetown
It is with great joy that I write to inform you that Pastor James Fullah and his family have completed their quarantine period and they have been declared Ebola free. Glory to God! He is faithful and worthy to be praised.
As you may recall, after the death of Mrs. Isatu Fullah, the wife of Pastor Fullah, two of their daughters, Musu age 16 and Yeabu age 6, also showed signs and symptoms of the virus. Yeabu was the first to show signs and was taken to the Ebola center. After some weeks Pastor Fullah became worried because he was not hearing any news about her. I worked with our leadership team to help trace his daughter. By the grace of God, we were able to get in touch with some officials at the Ebola command center and recently received news that she was recovering and doing well. Upon arriving at the center, Yeabu had tested positive for Ebola and she was transferred to another center for treatment. After some weeks in the new center, she began to show signs of recovery and by the grace of God she has now being declared healed and Ebola free.
Musu was the second to show symptoms of Ebola and was also taken to the center for testing. After a short stay there, she was returned home because the test proved negative.
It was quite a scene in the community, as Pastor Fullah’s quarantine period was declared over and Yeabu was released to the family. The entire community burst out in praise and thanksgiving to God for what they considered a mighty and great deliverance from death. For the most part, whenever Ebola enters a family, it almost wipes out the entire family. In this case, the people were very grateful to God for sparing the two Fullah girls.
On behalf of the Fullah family and the entire Sierra Leone District, I want to express our profound gratitude to you and the entire Nazarene family worldwide for your love, support and prayers. We believe that if this family is rejoicing today, it is because of the prayers of our wonderful Nazarene family around the globe that kept believing and trusting The Lord for His divine intervention in this family. We are extremely delighted to be a part of this great and wonderful family. May The good Lord continue to bless and keep us all and may He bring an end to this menace in the West Africa sub region, Amen.