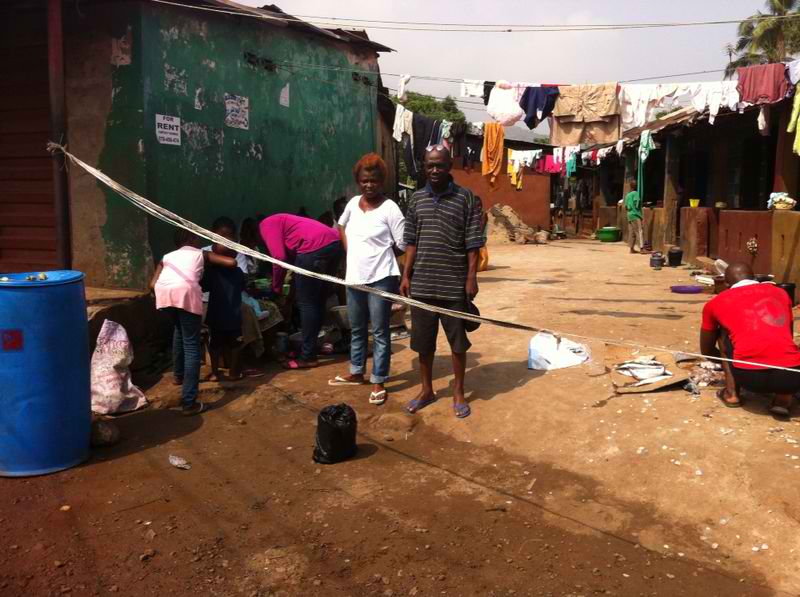 Free from the Ebola virus

but not from stigma – by Holly Beech.

Labor and his fiance  and children were quarantined for 21 days, not knowing if they too had Ebola. Thankfully, they all came through the quarantine period virus-free.

Even though they are healthy, the family is now treated differently by the rest of the community. People don’t want to interact with them. Vendors don’t want to sell them anything.

“Many people are afraid because they thought that after the quarantine we could still spread the virus to them,” Labor said.

Before he was quarantined, Labor and his neighbors were friendly and shared with each other. Now people often avoid him. “Those are my saddest moments,” he said.

“People used to talk to me. We used to do things together,” he said. “Now they run away from me.”

Labor said he has found comfort through his church, Faith Community Church of the Nazarene in Freetown. While he was quarantined, pastors and church members would bring him food, call him and pray for him and his family.

“Church, the fellowship, those are my happiest times,” Labor said.

Rev. Vidal Cole, the district superintendent and pastor of Overcomers Assembly Church of the Nazarene, said the 70 Nazarene churches in Sierra Leone are spreading the message that when individuals have survived Ebola or have made it through quarantine, they should be welcomed in and not treated as a threat.

This has caused new people to join the church, Cole said, because it’s a place they feel welcome. Churches have even experienced revival in the midst of the crisis, he said, and attendance has gone up.

Sierra Leone has had the highest number of Ebola cases, with more than 10,740 cases and 3,276 deaths, according to the World Health Organization.

The crisis has caused many schools, shops, businesses and mining operations to shut down, eliminating jobs and leaving several families with no income.

“The economic crisis is getting harder every day,” Cole said. “Our currency is declining. Prices of food commodities are going up seriously, so much that it’s difficult for people to buy.”

In rural areas, farmers who have been quarantined often return home to find that their crops have been harvested and stolen, Cole said.

Nazarene churches have distributed rice to more than 700 families, supplied through Nazarene Compassionate Ministries. They are also educating the community about Ebola and how it spreads. Each church has a tap bucket filled with chlorine water where members of the community come to wash their hands.

“Every local church in this community, they are doing this kind of work and sending a very big message to the community around,” Cole said.

But there is not enough food to meet the demand. “No, it’s never enough at all. Because this is what we eat every day, and here the families are large,” Cole said. “It’s normally a husband, wife, many children, brother, sister, cousin, father, mother, extended family.”

The Church in Sierra Leone is praying for an economic recovery and for the complete eradication of Ebola.