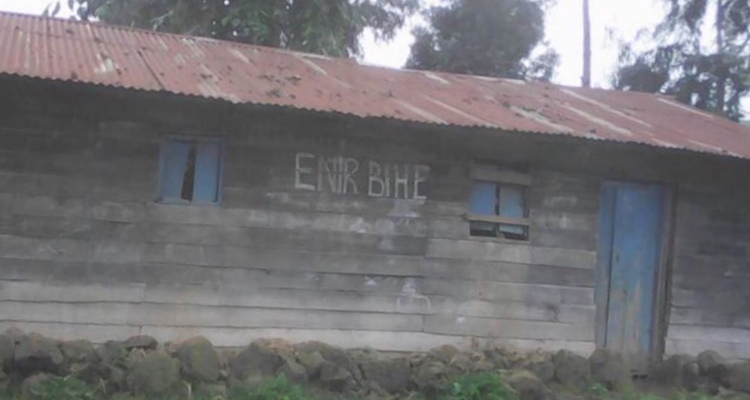 In 2003, a small Church of the Nazarene in Bisizi, Rwanda, was built out of recycled wood and old roofing. It was all the church could afford, but they needed a place for worship and have been worshipping there ever since.


Government officials recently arrived at Bisizi Church of the Nazarene as part of an effort to ensure buildings were meeting new required codes. The church did not pass and the government issued the closure of the building. Josepha, a widowed church pastor, pleaded with the officials, asking what they could do to keep the church open. The officials said the building must meet the new criteria in order for it to remain open. They required the church to add four toilets, replace the wooden walls with concrete walls, and to replace the old roof with a new one.


Josepha was confident enough in God’s provision for the church that she told the officials they would have the changes finished in under 30 days. The inspection team was surprised but agreed. They made it clear they would return at the end of the month and would re-issue the closure if the church did not meet necessary requirements.


The next day, local church members rose to the challenge and began selling their livestock to keep the church building open. They raised funds equivalent to US$400 in the first 24 hours and began making their own adobe bricks out of sand to replace the walls. The East District helped with a new roof.


Today, Bisizi Church of the Nazarene is still standing with a passing grade, and the government is hailing the congregation as the type of church “the country needs.” Now, everyone in the area is talking about the small village church that overcame the odds. Because of congregations like the one in Bisizi, Nazarene churches in Rwanda are flourishing. Last year alone, the Church of the Nazarene in Rwanda gained 4,000 new members — a 37 percent increase.


Prayer is requested for the churches across Rwanda as they work to obtain more resources while continuing to share Christ’s love in their communities. Similar churches with comparable challenges were forced to close or change their entire building.


As published by NCN News