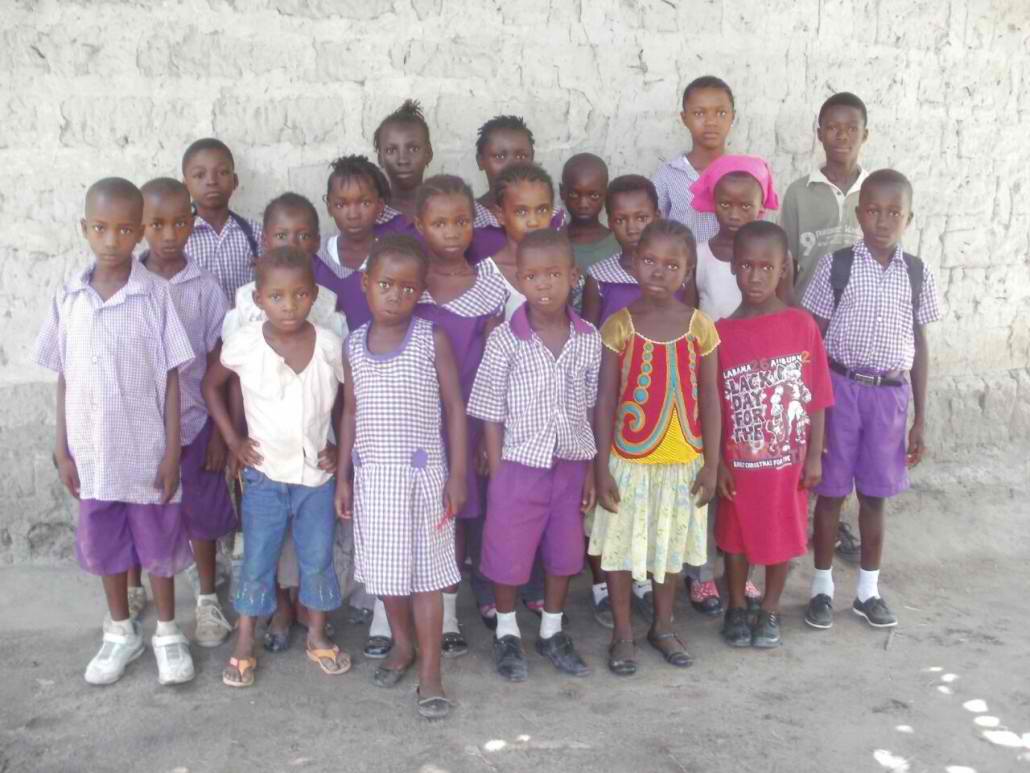 WEST AFRICA – The Ebola outbreak left in its wake thousands of orphans who are now trying to navigate life without their parents. Nazarene churches in two of the most affected countries, Sierra Leone and Liberia, are weaving together a safety net to help some of these children stay in school and experience the love of God.

“We really have the hearts to help, to reach out to these children and show them some love, because that is the first thing that they need,” Sierra Leone District Superintendent Rev. Vidal Cole said. “We want … to do whatever we can so that these children will not think that society has forgotten about them, that the world has turned their backs on them.”

Twenty orphans in Sierra Leone and 26 in Liberia are attending school through sponsorships from local Nazarene churches and Nazarene Compassionate Ministries (NCM).

Local churches, working hand-in-hand with NCM, have also instigated the “21 and Free” campaign, an effort to educate communities about Ebola and reduce the stigma against Ebola orphans and survivors.

“This campaign has been a great tool for our pastors and young people in reaching out to our various communities with the message that these children should be treated well, with dignity and respect, without any stigma attached to them,” said Pastor Steven S. Kanu, the Nazarene Church’s zone coordinator for the Waterloo area in Sierra Leone.

The church in Liberia has created a Community Health Evangelism Team, led by Elizabeth Johnson. Mrs. Johnson is providing counseling for 11 Ebola orphans and 22 survivors in Monrovia.

Nazarenes in Liberia are also funding the education of the two youngest children of Nazarene Pastor Joe Sonkpah and his wife, Mrs. Hannah Sonkpah, who both died from Ebola in October. The family’s church, Grace Chapel Church of the Nazarene, along with others on the district are working together to care for the children’s physical and spiritual needs, said Rev. Daniel Johnson, the Nazarene ministries coordinator in Liberia.

The Sonkpah siblings, ages 16 through 31, are thankful for the help, 24-year-old Gabriel Sonkpah said, but at times they still face food shortages.

Churches’ efforts are making a difference, but there are still many orphans in need of food and access to education, Pastor Kanu said. The Nazarene primary school run by his church is sponsoring the education of 20 orphans, with the help of other churches in the district. But this is only scratching the surface of the need, he said.

“As some children have heard and seen what we have done in helping, they have also come and asked for help, but because of the space we have put them on a waiting list,” Kanu said.

There are more than 16,600 children who have lost a parent or caregiver to Ebola in Sierra Leone, Guinea and Liberia – including 3,600 children who lost both parents, according to UNICEF. Thankfully, the spread of the disease has dropped drastically, and Liberia was declared Ebola-free this month.

With the vast number of orphans, Rev. Cole intends to explore possible partnerships between the Church and other organizations that are also trying to help.

Though orphans are often taken in by relatives, they still might face emotional neglect and a shortage of resources, Cole said. Farming is the main source of income for families in the Waterloo area, and adding another person to an already crowded home and stretched budget is challenging, he said.

Some orphans live on the streets and try to find work in petty trading, domestic jobs and farming, Kanu said. But they are vulnerable to being taken advantage of, and when the day’s work is done, they don’t always receive the food or money they were promised.

A big focus for the Church is helping orphans to stay in school. Education fees often eat up a big chunk of household incomes, making it difficult for children to go to school*.

“In spite of the economic hardship caused by the Ebola outbreak, the Church of the Nazarene in Liberia is making tremendous effort to meet the educational needs of Ebola orphans,” Rev. Johnson said.

In Sierra Leone there’s another hurdle: visibly pregnant girls have been banned from going to school. The government mandate also prevents the girls from attending Nazarene schools, Cole said.

“The church is engaged with ministering to (the girls) on a one-to-one basis, and we are also helping the communities to understand their situation and reduce the stigma,” Cole said.

EMPOWERMENT FOR THE FUTURE

More than just meeting the immediate needs of children orphaned by Ebola, the church is seeking to empower them for the future through education, loving relationships and discipleship.

“The church here in Sierra Leone, we really desire to see these children turn out and be good leaders in society, … people that know God, people that have gone through the crisis and come out successful (and) victorious,” Cole said.

The Church’s outreach throughout the Ebola crisis has drawn more children to church and has changed the way people view the purpose of the church, Cole said. They are realizing that church is not just about worshiping on Sunday, but it’s about caring for one’s neighbors.

“By God’s grace, I see the church as a beacon of hope and light to our dark community,” Pastor Kanu said. “I believe God wants to use us to bring about transformation in our community.”

If you would like to learn more about how you can help with the Nazarene Church’s Ebola relief efforts, please contact the Africa Region. You may also visit Nazarene Compassionate Ministries’ Ebola relief page to make a donation.